Jan Wallander (1920-2016), after whom the prize was named, was a member of a family that has been active within art and literature for generations. Jan himself initially intended to make his career in this field. However, circumstances led him into academia instead, with postdoctoral studies in economics and sociology.

The Depopulation of the Forest Country 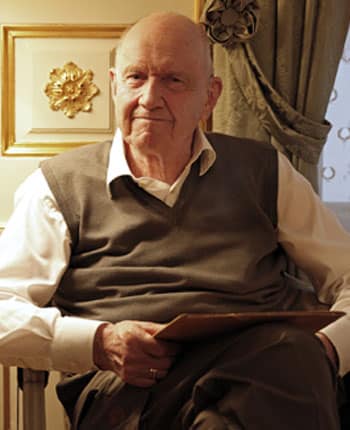 His Ph.D. thesis – The Depopulation of the Forest Country – had a foot in each of these two sciences. Jan’s postdoctoral research was in the same field, and he took charge of the newly formed SNS (Centre for Business and Policy Studies). After this, from 1952 to 1960, he was head of IUI (the Research Institute of Industrial Economics), which was the leading Swedish business research institute at that time. He also became senior lecturer and assistant professor at Stockholm University.

In 1960, he was faced with deciding between becoming a full professor, or taking over as chief executive of Sundsvallsbanken, a provincial bank in Norrland. He opted for the bank, as it enabled him to try out in practice the ideas resulting from his research.

In the late 60s, Svenska Handelsbanken got into a serious crisis, which resulted in the chief executive and many senior managers leaving the Bank. Jan Wallander was offered the vacant chief executive’s post. He had now had experience of how his ideas worked in practice, and had also developed them further. He now had the opportunity to try them out on a far larger scale.

In the spring and summer of 1970, he and his staff began to create a completely new organisational structure at Handelsbanken, and a total change in the focus and goal of its operations. The principle of the new organisational structure was decentralisation; this was based on a strong belief in people’s ability to grow with the tasks they are given, and their desire and ability to take responsibility. In a book published in 2002, he described the changes that he made at the Bank, and the reasoning behind them. The English title of the book is “Decentralisation, why and how to make it work – The Handelsbanken Way.” The title reflects the human outlook that typified Jan Wallander’s approach to business.

His years at Handelsbanken are the centrepiece of his life’s work. He started as chief executive, before becoming chairman of the board until 1991, when, at the age of 71, he became an honorary chairman. He remained active in connection with the Bank up until quite recently.

In 1973, at Jan Wallander’s initiative, the Bank introduced a profit-sharing system – Oktogonen. The profit-share units are the same for all staff, and are disbursed when an employee retires. Profit-share units are allocated in the years that the Bank reports higher profitability than the average of other Banks on the Swedish market. Jan Wallander could be pleased that this was the case every year since the system was launched.

You can find out more about which cookies we are using or switch them off in settings.

This website uses cookies so that we can give you the best possible user experience. Cookie information is stored in your browser and performs functions such as recognizing you when you return to our website and helping our team to understand which parts of the website you find most interesting and useful.

To be able to use our website, place orders etc. we need to set a number of feature cookies. We also use these to maintain the site so that it works technically. Necessary cookies should always be activated so that we can save your settings also for cookies.